Problems under Windows 10 after November update could be fixed!

Until version 15 it is now possible to access opened CRYPTDRIVE's under Win 10. The compensation via virtual machines is no longer necessary. 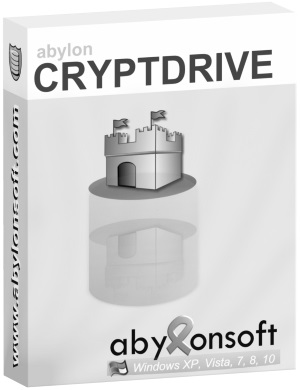 Real-time encryption Access protection for your data through automatic encryption

Non-encrypted files are easy prey for spies and other curious people. The only remedy is a sufficiently secure encryption with recognized encryption methods. The software abylon CRYPTDRIVE creates so-called container files, which are secured with the known encryption algorithms AES or Blowfish. Only if the corresponding key was used, the secured data show up in the file explorer. As key a password can be entered over the keyboard, as well as a chip card, USB stick or certificate can be used. When Cryptdrive is open, the contained files are displayed in the assigned drive and can be edited and opened there. Applications can also be installed here, whereby the encryption runs automatically in the background. When Cryptdrive is closed, the drive is hidden and the contained data is protected against further access.

The computers are becoming more and more mobile. Nowadays, powerful electronic components fit into even the smallest housings. In professional life, too, a laptop, notebook or ultrabook is increasingly being used instead of the clumsy desktop PC. Since Microsoft Windows 8 has optimized its operating system for finger input, this operating system can even be found on tablets or convertibles. However, the mobility of these devices increases the risk of loss through forgetting or criminal energy. In this case, the encryption of your personal data is almost mandatory. The data is stored in a highly encrypted Cryptdrive and is protected against unauthorized access. The Cryptdrive is opened with the appropriate password and/or hardware key. There is no secret entrance or backdoor. In this way the secured data is protected against unwanted access in the worst case.

TIPP: When selling your computer, tablet or hard disk, your personal data or the entire drives should be cleaned by multiple overwriting with our software abylon SHREDDER.

Awards for abylon CRYPTDRIVE All Awards

Filecluster: This software is 100% clean!

Softpedia certificate: No Spyware, No Adware, No Virus

With exception of the software apps abylonsoft has published all programs in the version 15.90.1. Beside small optimizations and error corrections ... read more

I've used DriveCript for years on my old Xp computer. Easy. No problems.
I can't figure out what the hell is going on with this new version. NO INSTRUCTIONS. I want to make a simple container file.... can't do it. You've gotten entirely too complicated for the simple things I want to do.
May be there is an easier way, but I could not find it. And no HELP files!

I've used DriveCript for years on my old Xp computer. Easy. No problems.
I can't figure out what the hell is going on with this new version. NO INSTRUCTIONS. I want to make a simple container file.... can't do it. You've gotten entirely too complicated for the simple things I want to do.
May be there is an easier way, but I could not find it. And no HELP files!

Hi Sebastian,
In principle, nothing great has changed in the program abylon CRYPTDRIVE and their operation. Unfortunately, the requirements have increased due to the operating system. I assume that you have not activated the test mode under Windows. This is a prerequisite for the use of self-signed certificates, which we use in our software.

Slovak language??? the world is not just England and Germany

Hi JuDaS ArIOth, feel free to translate it.
Contact us and we will show you how the translation is done.

I would like to know if a folder on a USB drive can be encrypted.
Thanks.
Sarosh

abylon CRYPTDRIVE is a so-called container solution. A directory is not encrypted in the sense. However, you can create the encrypted container file on the USB stick and save the files of the directory in there. Only if this is open and thus decrypted, the corresponding files can be accessed.
If you want to encrypt single files, you should have a look at our software abylon BASIC. Other alternatives are abylon SHAREDDRIVE or abylon CRYPT in the BOX.

Which of the Company-X product does your product compare to Crypt or Crypt-Plus? I presently run both of their products and always interested in buying other non-US made Disk Encryption products.

Hi KenY, thank you for your interest in our software. However, for legal reasons it is not allowed to comment on foreign products. Sorry

Hi Bobo,
we regret the circumstance, but it is inexplicable to us. No one else has heard of a similar problem. Could you describe your approach and the problem as precisely as possible Screenshots can help in some cases. Thank you.

I need to know how easy is to use your program when encrypting large folders/files.
I am excited to test the features of this piece of software and grateful to have this opportunity.

Our software can be tested for 30 days free of charge. We would be happy to receive feedback on your experience.

I have few question about this Application. This free License is it for how long? And why is there no indication if a purchased license is for lifetime or a certain number of years. I could not find this information anywhere in your website and even in the payment table. Kindly clarify.
Thanks

I assume that you mean the free covermount for private users of SharewareOnSale.

As far as I know, our partner SharewareOnSale has published this information. If this is not the case, please contact SharewareOnSale directly.
Our software can be used without any time limit. The limitations are only:
1. updates are subject to a fee
2 The setup can only be installed until the end of October.

If you have any further questions, please feel free to contact us again.

Just curious about your methods, thanks!

Good luck with the testing.

Automatic encryption for programs and files - it's Greating!